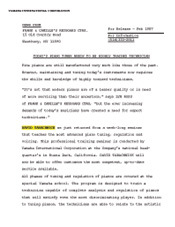 "Fine pianos are still manufactured very much like those of the past. However, maintaining and tuning today's instruments now requires the skills and knowledge of highly trained technicians."

"It's not that modern pianos are of a lesser quality or in need of more servicing than their ancestors," says LYN ROSS of FRANK & CAMILLE'S KEYBOARD CTRS, "but the ever increasing demands of today's musicians have created a need for expert technicians."

Click here to view the article in it's entirety